Neither pirates, nor sharks, nor crocodiles shall keep these carriers from their appointed rounds.

Self Portrait as the Barefoot Mailman is installed headfirst in the ground, as if toppled by a hurricane. The faux bronze sculpture refers to the legendary barefoot mailman, who delivered mail on the first U.S. mail route between Palm Beach and Miami in the 1880’s before there was an overland road. Drawing on the history of South Florida as well as Miami Dade’s history of public sculpture, Gast has created a playful alternative to the traditionally overstated and masculinized civic monument. Past artworks by sculptor and video artist Christy Gast often feature herself in costume as the central character, making it natural for Gast to transform this mailman figure into her likeness. Gast had a laser scan taken of herself dressed up as the legendary mailman assuming a monument-like posture, and used this as the basis for the sculpture. In doing so, she presents a subterfuge – an impersonation of the character of the mailman, infused with her female persona. Gast also adds another dimension of humor and subversion by having “Self Portrait As A Barefoot Mailman” upside-down and partially buried as if having been blown over by a strong storm and landing head-first, a witty gesture to having one’s head quite literally “buried in the sand.” 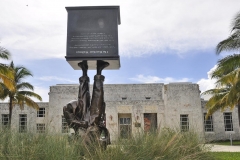 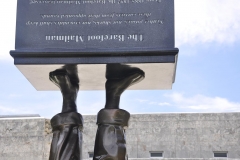