Locust Projects is pleased to present Inholdings, an exhibition of new work by Miami-based artist Christy Gast. The two works in this exhibition, a full-scale textile replica of a Nike Hercules missile and a single-channel video entitled War Drums refer to the Hole-in-the- Donut region of the Everglades. The works in Inholdings shift the focus between natural, cultural and desired histories by appropriating craft traditions to document a place.

The missile sculpture, Gast’s largest textile work to date, is suspended in the main gallery as if stored in a hangar awaiting activation. It is constructed from botanical textile designed and printed by the artist, which overlays images of tomato bushes, Brazilian pepper trees and lovegrass. Remnants of agriculture, invasive species and native flora compete for surface space and reference particular moments of conflict in the landscape.

Hole-in-the-Donut, the site Gast examines for Inholdings, is marked by invasions and colonizations, both ecological and geopolitical. It is a deforested pine rockland in the Everglades that was plowed for tomato fields in the early 1900’s. A HM69 Nike Missile base located there housed three nuclear warheads and was on high alert during the Cuban Missile Crisis. The base closed in 1979; the farms foreclosed decades earlier. Brazilian pepper invaded the fallow fields, and eradication required scraping the fields to the fossilized limestone bedrock. Lovegrass is the first native plant to recolonize this moonlike terrain. Gast’s work stems from extensive research and site visits to places she thinks of as “contested landscapes,” which exhibit evidence of conflict in human desires. She traces, translates or mirrors those conflicts through her art practice.

The single channel video installation War Drums was shot in one of the few existing stands of pine forest in Dade County, near a decommissioned nuclear missile base that was on high alert during the Cuban Missile Crisis. The camera pans the horizon in a continuous circle once per minute, moving like the second hand of a clock. At 12 o’clock the camera passes a woman playing traditional Afro Cuban rhythms on a conga. At 6 o’clock, the camera pans another drummer playing snare cadences, military drum corps style. Embodying the cultural conflicts of the Cold War, the drummers pass beats between themselves as the listen deeply to, and interpret, the sounds of the forest. 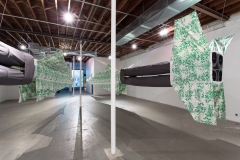 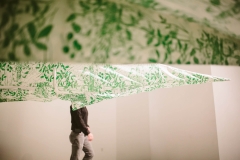 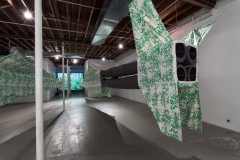 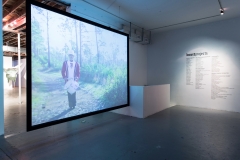