Dear Enemy consists of four perfumes created by a team of artists and scientists in an attempt to initiate interspecies communication between humans and beavers in Tierra del Fuego, and the application of these scents in both human-dominated and beaver-dominated locations through exhibitions and fieldwork. The Dear Enemy Effect is a behavioral phenomenon observed in animals who are less aggressive to neighbors with whom they have clearly established boundaries. Beavers establish boundaries through building scent mounds –piles of mud, leaves and pond-bottom debris- around the perimeter of their territory. They then smear castoreum, a substance that comes from their castor sacs, over the mound. Chemicals compounds in the castoreum –gleaned from the shrubs, leaves and twigs that the beavers eat- convey to young roaming beavers that a particular pond is occupied.

Since their introduction into Tierra del Fuego, beavers have naturally been using their scent mounds to claim land and establish belonging. As of late, this has proven difficult for humans to accept, seeing as the absence of predators in Tierra del Fuego has allowed beavers to be very successful.

As a result of a collaborative inquiry about how to approach the conflict between humans and beavers in Tierra del Fuego, artist Christy Gast, curator Camila Marambio, ecologist Derek Corcoran and biologist Giorgia Graells have taken to experimenting with the fabrication of scents that would deter beavers from moving into specific territories. These fragrances, produced at IAO, were field tested in Tierra del Fuego and North America in 2016.

This project is being created through ENSAYOS, a research and residency program in Tierra del Fuego, and a grant from the Art Matters Foundation. 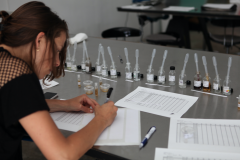 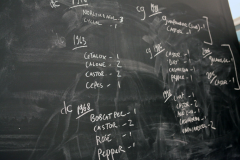 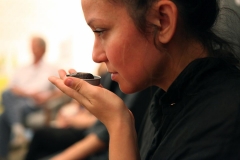 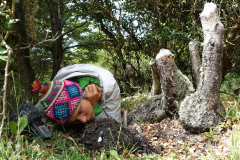