Beyond the End at the Kadist Art Foundation in Paris was the first exhibition of projects by artists, scientists and thinkers involved with Ensayos, a nomadic research collective based in Tierra del Fuego. I have been involved since 2010 when founder Camila Marambio invited me to the inaugural residency. Together with Marambio, who is a curator, an international group of artists, scientists and Tierra del Fuego locals embarked on an open-ended, investigative research program which presumes that Tierra del Fuego is the center of the world–its problems are a microcosm of global ecological and social issues. My contribution to Beyond the End consisted of a suite of videos about the “beaver issue” (Canadian beavers are an introduced species in TdF), a commissioned wallpaper design, and collaboration on the Patagonian shack that “dammed” the gallery space.

From the Kadist Foundation press release

Beyond the End is an exhibition dedicated to Ensayos, a research and residency program initiated in 2010 in Tierra del Fuego by curator Camila Marambio. Over the years, the Ensayos residencies have given shape to a dialogue between artists, scientists, local inhabitants and Karukinka Natural Park. Based on the premise that only creative collaboration can efface frontiers in the field of biocultural conservation, Ensayos enacts the complex interdependence of humans, non-humans and matter with the urgency of maturing aesthetic sensibility in the face of scientific discoveries. The work in the exhibition attempts to give form to this multidisciplinary, multispecies research-based project. 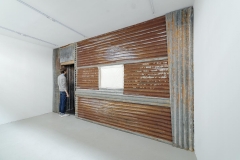 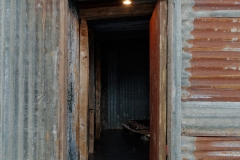 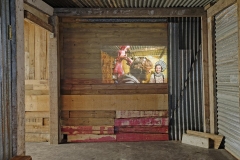 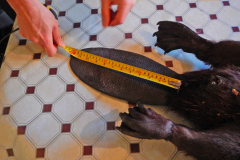 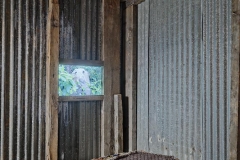 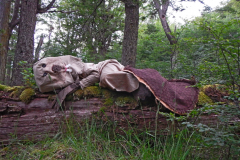 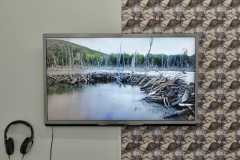 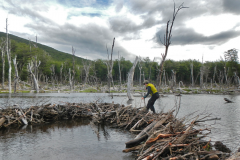 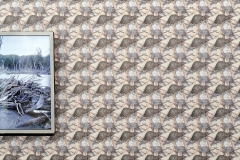